Are you an Elite Athlete Interested in Competing with us Saturday, May 14? 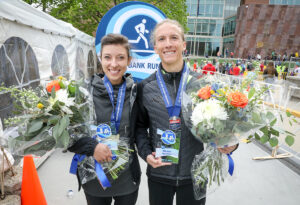 After registering, download, complete and return a W-9 (American Athlete) or w-8 (International Athlete) to

The USA 25 km Open Championships are open to U.S. citizens 14 years of age or older as of race day. USATF membership and eligibility to represent the United States in international competition are additional requirements. Complete the  USATF membership number field when you register.

Women participating in the USATF 25 km Championships for prize money, USATF Running Circuit points or finish placing, along with invited international female Elite athletes, will participate in the early start at 8:19a.

Men participating in the USATF 25 km Championships for prize money USATF Running Circuit points or finish placing, along with invited international male Elite athletes and the rest of the Amway River Bank Run 25K field will start at 8:30a.

Athletes who participate in this competition are subject to drug testing in accordance with the United States Anti-Doping Agency (USADA) Protocol for Olympic Movement Testing (USADA Protocol). Testing may take place after any preliminary, qualifying, or final round. USADA will be responsible for conducting comprehensive drug testing, as well as the adjudication of positive findings.

Athletes selected for doping control are required to sign a testing notification form by the assigned doping control chaperone, who will remain with each athlete until she or he arrives at the doping control testing center. Athletes have one hour from the time of notification before they must report to the doping control testing center. Once athletes complete the drug testing process, they are free to leave. Athletes with positive drug test results will have their cases adjudicated according to the USADA Protocol and will be penalized, if appropriate, according to applicable IAAF or World Anti-Doping Agency rules.

Such penalties may include, but not be limited to, a period of ineligibility from competition, as well as disqualification from past competitions and cancellation of awards and prizes previously awarded. Any substance taken by an athlete is at his/her own risk and may result in a positive sample.

BEWARE: some nutritional supplements, prescription, cold medicines and over-the-counter medications contain prohibited substances. Information regarding specific drugs and substances may be obtained by calling the USADA Drug Reference Line at 800-233-0393 within the U.S., 719-785-2020 outside the U.S. or at www.usantidoping.org.